Lena is the most beautiful buckskin mustang.  She had a long hard road before she came to Noble.  Her history is vague, but we do know she was starved, locked in a stall for a year and never got out.  Lena soon learned not to trust humans.  Many tried to help her and she was very hard to even halter.  Now, she is a pretty happy horse.  She loved to go out to pasture with her longtime mustang friend, Lady, and run, roll, and mutual groom.

Georgie came to Noble with her dam, Charlotte, in 2013.  She was a darling 4 month old foal.  Both dam and foal had been neglected, living in filth and without adequate food and water.  Georgie is now a beautiful 9 year old with a bright future.  She loves to run and play with her friend, Reba, and is so smart and loves to learn new things.

Blackie came to Noble with his long time companion Jess, in the spring of 2012 after their owner passed away.  Their family and friends cared where they went.  Blackie and Jess needed a safe and caring home where they could comfortable live out their lives together.  Because they had been together for for 9 years, they had a very strong bond.  Finding 2 very old horses a home together can be hard and separating them seemed cruel.  Blackie was a but shy when he came to Noble, but now he is super friendly, trusts us and has a lot of spunk.  Sadly, Jess was euthanized at 36 years old.  We all miss her dearly, but are glad we could give her and Blackie a few more years together.

Cash is a handsome palomino with dapples and a favorite with all the volunteers, because of his charm.  Cash has a serious hoof problem called navicular syndrome and cannot be a riding horse.  Years before he came to Noble, many had tried to help Cash with surgeries for broken bones in his hooves and later he developed navicular & coffin bone arthritis.  He was soon to be homeless.  Cash was at risk of going to slaughter, so Noble gave him a safe place to live.  He has a good life at Noble.  He still plays hard during turnout with his gal, Charlotte, and loves all the attention from our volunteers.  We help with his pain using meds when needed and make him comfortable with extra bedding in his shelter.

Reba was rescued from starvation with her 1-1/2 year old filly.  She was nursing her filly without enough food and both were in bad shape.  Both horses found very good homes, but unfortunately, Reba's adopter wanted to get different horse.  Noble agreed to give her a home in 2014.  She is so sweet, beautiful and patient.  Reba now teaches all the new volunteers how to lead and groom - a job she enjoys!  Her soundness issues do not cause her many problems and she will live at Noble Horse Sanctuary for the entirety of her life.

Charlotte, affectionately know as Charlie, came to Noble in October 2013 with her 4 month old filly, Georgie.  Both had been neglected and handled roughly.  Charlotte was a brood mare and had many foals.  Now she has a new life at Noble enjoying her herd mates.  She is so pretty and pleasant to work with.  She loves to play with Cash in the pasture and enjoys volunteers grooming her and taking her out to eat grass.

Louise came to Noble with Thelma after years of neglect.  She was very underweight and had serious hoof problems.  Now, Louise has come into her own.  She's inquisitive and quite energetic, loves to run and play.  She gained weight fast and we have even had to put her on a diet.  She loves to eat!  Her hooves are doing well and soon we hope she can start some training in hopes of finding a loving home.

Lady was born wild and free in Utah.  Lady was captured by the BLM and then adopted out to someone with little horse experience and none with mustangs.  It didn't work out well for Lady.  She has been poorly handled and treated for years, which caused many of her fear related problems.  It took us 6 months to halter her and then we slowly started working on the basics, which terrified her.  We soon discovered she would have seizures from fear memories.  We go slow and ask her to learn new things that are beneficial for her welfare.  Lady is a different horse now.  She loves her grooming, going out to run, play and mutual groom with her mustang friend Lena.  Our farrier can now trim her hooves, which could never be done before.  Lady has learned to trust.  The volunteers are thrilled they can pet her, which was impossible a few years ago.  She hasn't had a seizure in 2 years and is happy and has learned humans are pretty okay.  Lady is a beautiful horse with a big heart and she will live out her life at the sanctuary.  We can't make her forget her fear memories, but we give her good ones now. 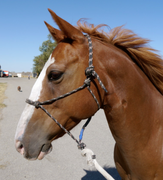 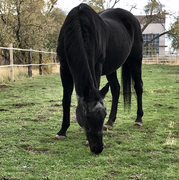 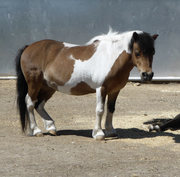 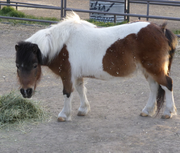 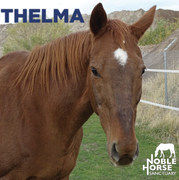 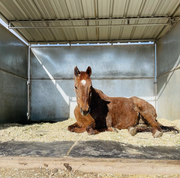